Omigod you guys! Its only 1 month until Legally Blonde hits the IPAC Stage! Get in now to get your tickets before they’re all gone!!

Into the Woods – Cast Announced!

GO TO THE WOOD! We are absolutely thrilled to announce the cast of our May production of Into The Woods!

With over 170 auditions for only 17 roles, this was a very tough process! We are once again blown away by the talent in the Illawarra. Congratulations.

So Popera wins Best Production for A Chorus Line

The So Popera team were delighted to be a part of the audience and celebrations on the night, with many other Illawarra companies also taking home their ‘top gong’, Including Southern Stars and Albatross Musical Theatre Society.

A Chorus Line – The Reviews are in!

In Richard Harris’ epic, evergreen pop song MacArthur’s Park the firebrand performer and songwriter sang about a relationship in these metaphorical terms, and I paraphrase, ‘I have made the perfect cake, but I left out in the rain, and it took so long to make it, and I’ll never have that recipe again’.

I don’t know long he took to make it but  American thespian Michael Bennett sure did come up with a wonderful recipe for a musical with his show which is currently having a revival care of So Popera Productions at the Illawarra Performing Arts Centre.

This classic Broadway musical has a great storyline – we get the ‘inside stories’ of dancers auditioning for a new Broadway, along with a classic score by Marvin Hamlisch with lyrics by Edward Kleban which featured some lovely soulful songs such as What I Did For Lovewith some terrific dance numbers, especially the big Company numbers. There is even some dance routines thrown into the mix.

Amy Copeland’s production is a real zinger and worth travelling the distance to, even if you don’t reside in the Illawarra. Copeland’s creative team- Music Director Peter Copeland, Choreographer Teegan McKean, Associate Choreographer Dane Sanderson and Costume Designer Sophie Rose King, each work together well to bring this show to life, along with producer Mal Copeland who made the show possible.

Performances across the board were good. John Michael Burdon as Zach was suitably brusque and demanding in the role played by Michael Douglas in the movie.  One of the show’s highlights was the scene between him and Cassie where their prior romance is revealed.

Catrina Ralph has a solo show stopping scene where she dances in an exemplary way up and down stage with the number The Music And The Mirror.

Which brings me to the dance hall mirror which spans across the stage. One particular scene reveals a full orchestra, led by Peter Copeland, playing beautifully behind the mirror, a quaint and no doubt very effective way of staging.

Anastasia Feneri showcased a very pure voice with a very poignant rendition of What I Did For Love. Equally poignant was the scene where the number At the Ballet came to life performed by Michaela Neto as Sheila, Kimmie Jonceski as Bebe and Katherine Akele as Maggie.

The show ran for a memorable two hours straight through. Bennett brings it all together with a fantastic, final  Company number with top hats and tails in the best show business tradition.

With plenty of Razzle dazzle as well as lots of  heart, get your ticket to ride. A CHORUS LINE is playing IPAC until Saturday 26th May 2018.

This enterprising Company’s next show is in January 2019 and will another classic musical, Singin In the Rain, again at IPAC. 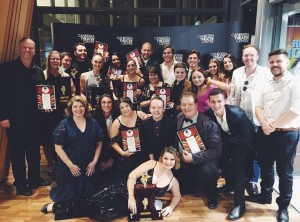 So Popera had wonderful success at this years CAT Awards being recognised for our achievements across both of our 2017 Productions – Chicago and Beauty and the Beast.

So Popera wishes to thank the CAT Awards for their recognition, and congratulates all recipients and nominees from all companies on their successes at this years Awards!

Chicago! Yet another So Popera sellout success!!

So Popera are overwhelmed and excited with the recent sellout season of Chicago at the Illawarra Performing Arts Centre! Thankyou to everyone who came and watched the show, but also those who helped out on and off the stage! We can’t wait for the next show… Who’s excited?

Following the success of our most recent production Beauty and the Beast, So Popera Productions are thrilled to present the next instalment of the So Popera Cabaret Series.

So Popera will present a lineup of local Illawarra Talent from both our recent and upcoming productions, featuring Scott Radburn, Anne-Maree Fanning, Allegra Wilson, Anastasia Feneri, Danny Condon and more!

You will enjoy an afternoon of well known theatre songs, original songs and showcasing a sneak peek of our next production Chicago the Musical.

Beauty and the Beast – A HUGE success!!

Thankyou to everyone who came to support Beauty and the Beast! We are thrilled that our production SOLD OUT and had rave reviews!! The cast and crew had a brilliant time during the season! We cant wait for the next one!!  Stay Tuned!

So Popera Productions were very proud to be once again honoured at the CAT Awards in February. Receiving accolades for Best Director of a Musical, Best Set Design for a Musical and the prestigious Golden CAT Award for Significant Contribution to Theatre and Production, the So Popera Team were once again humbled and thrilled to be recognised by our industry peers.

The Producers – THANKS for a great success!

So Popera Productions are proud and humbled by the audience numbers that attended the season of The Producers at IPAC in January!

We were so excited for our cast and crew at the SELL OUT on our closing show! What a BANG to go out on!

Looking forward to the next one…. WE’RE EXCITED!